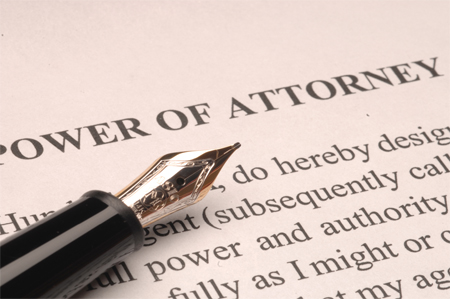 Pennsylvania law regarding powers of attorney (POAs) changed in 2015, so if your POA is dated before then, you may have problems. But when you have a new POA executed, when does it go into effect? Who is the principal?

Powers of attorney in Pennsylvania are created by statute and by the laws of agency. First, let's figure out who is who.

There is the "principal": this is the person who is giving his authority to another person. The second person involved is the "agent". The agent is required by law to act -- always -- in the best interests of the principal. In other words, the agent doesn't get to use the principal's money and property for his own uses. The agent operates under the authority given to him by the principal.

The principal can give the agent a wide range of authority, from very limited powers to write checks to broad powers, where the agent could sell the principal's house. It is entirely up to the principal.

Typically, the principal will execute the POA document in my office. It will be witnessed by two disinterested people. We don't keep bored people around the office for this purpose: "disinterested" means that the witnesses have no financial interest and are not the agent or the alternate agent.

The POA is also notarized by a Notary Public who is not one of the witnesses. All of this formality was part of the statutory changes in 2015.

At this point, the POA is valid. But, under Pennsylvania law, before the agent can act for the principal, the agent must sign the POA and agree to abide by certain rules and ethical considerations.

The next step is up to the principal. Some people prefer not to inform the agent at this point, keeping their POA document unsigned but ready for the agent to use in case of emergency. Other people bring their agent to the meeting in my office and the agent executes the POA right after the principal. In either case, the agent must accept the authority given to him by the principal in writing.

The bottom line is this: Do it right the first time.

Do it ahead of time (be prepared).

Do it privately, without courts and government agencies involved.

I do my best to write these articles in plain English, without citations to statutes and cases; that's for lawyers and judges to worry about, not you.

On a personal note, I wrote this article in memory of my good friend, Jim. Jim was a good man and he helped many people who were down and out. Jim never took any credit; he always said that he was acting as God's agent.

If you don't plan, the government plans for you.

Here's the usual caveat, without too much legalese: this little article isn't legal advice, nor does it create an attorney-client relationship. But then, you're smart: you already knew that. Have a great day!